One of the most commonly used chords in music is the A Major chord.

The major chord is an important building block for any musician.

Though it is typically thought of as a “happy” sounding chord, it can be used in a variety of musical contexts.

In this post, we’ll take a look at 7 of the most popular ways to play the A Major Chord on the guitar.

There are a few different ways (3) to play the A chord in the open position.

I do not have a preference as to which is better to learn first. I am just showing the order in which I learned how to play the chord. 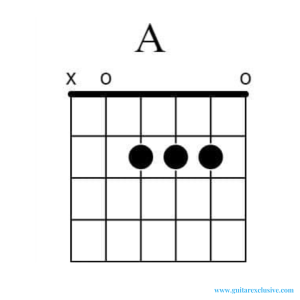 This was how I would play the A chord for a while.

What eventually made me switch to the next version below is that I felt it got too cramped with the index finger.

As you can see in the image below, we have removed the index finger.

The allows the fingers to be more comfortable on the fret and I feel you hear the openness of the chord more by doing it this way.

The version would be my “go to” once I started playing in loud Punk Rock bands.

What attracted me to this was the fact that you can use your entire index finger to barre the strings.

When it came time for palm muting, then it gave the feel that I had control over things and was able to produce a nice and chunky sound with distortion.

I don’t know if it’s a true open chord as the high E string can be muted depending on how you play it.

Nevertheless, I clump it into the “open version” category.

Ah, the Barre Chord which is the next logical version to know.

If you’d like more information on Barre Chords, check out our guide here: Barre Chords A Comprehensive Guide.

In this version, we are taking the F chord shape and moving up 5 frets.

This was idea during my Ska band playing days.

You can really hear the shaprness when playing those upstrokes.

This is an interesting version of the chord that I have barely used.

Perhaps after writing this I may experiment more with it.

If you take this all the way back to the 2nd fret, you will have a D chord.

Move this up along the neck and you can play any chord in this variation.

Another version that I don’t frequent much around.

That’s most likey due to the fact that I play the acoustic guitar more and that chords was more in my electric guitar repertoire.

The best way to describe this version is it’s like the open version of the chord just moved all the way up to the 14th fret.

Then with your index you will Barre all but the 6th string on the 12th fret.

The A major is one of the most popular chords in music.

It’s a happy, upbeat chord that can be used in a variety of situations.

We took a look at seven ways to play a this on the guitar.

Some you will use more than often. Some you may avoid 100%.

It’s good to know of all the differtent ways to play this chord.

That’s all for now!