New guitar players may wonder how many frets are on a guitar and why does that matter?

The answer to this question depends on the type of guitar you have, but there’s one thing that will never change: they’re all really cool!

What Are Guitar Frets?

Frets are metal bars located on the neck of a guitar which serve as markers for notes.

Why are there frets on a guitar?

The strings of a well-tuned guitar produce beautiful tones.

If an instrument player’s fingers are off the mark by just an inch or two, then their music will sound completely different than it should!

Without frets, half the world’s rock and jazz music might not exist.

I know from my own experience that I can play well with fretted instruments, but as a beginner to non-fretted guitars, it took me months before I could hold down G# for an extended period of time on chord progressions in order to reach those higher notes like A or B.

Why does the number of frets matter?

Depending on your skill level and preference, you might want to tune your instrument with more or less frets in order to best suit your needs.

For example, if you play lead for an alternative rock band then it would be beneficial to have access to extra high-pitched strings so that you can reach higher notes than normal when playing solos.

Guitar players are often curious about the number of frets on a guitar.

There are generally 22 to 24 frets, but this varies depending on the make and model. The neck is typically made from either mahogany or maple wood.

The number of frets also varies depending on what type of music you want to play.

Musicians who play jazz may like more frets than those who prefer playing rock music for example.

22-fret guitars are the most common type of guitar for beginners.

They’re great because they can be used to play almost any song out there and it’s easier than learning on a 24 fret guitar if you want to become top shredder.

That doesn’t mean all songs will still be playable with this less amount of frets; so it may require some different techniques.

Number of Frets On An Electric Guitar 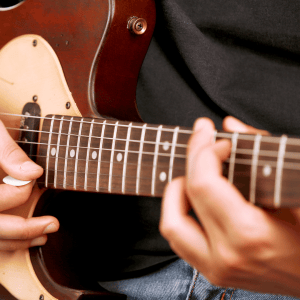 Modern electric guitars such as the Fender Telecaster and Stratocaster have between 21 and 24 frets (but most often 22).

Here’s a quick list to outline the number of frets for these popular models.

Les Paul models typically have 22 frets. At the 16th fret is where the body joins the neck.

The Gibson SG model has 22 frets. At the 19th fret is where the boy joins the neck.

The Fender Telecaster and Stratocaster typically has 21 or 22 frets, depending on year and model.

The Fender Jaguar and Jazzmaster has 22 frets.

The RG series has the most subtypes of any Ibanez model and is one of the best-selling guitars for rock music.

The deep cutaway gives you 24 frets as standard.

This makes it a popular choice among metal musicians who want to be able to reach high notes with ease while still maintaining an aggressive playing style.

22-fret guitars are the most common type of guitar for beginners.

They’re great because they can be used to play almost any song out there and it’s easier than learning on a 24 fret guitar if you want to become top shredder.

However, that doesn’t mean all songs will still be playable with this less amount of frets. It may require some different techniques or moving entire phrases in order to reach certain notes like high F#s.

Number of Frets On An Acoustic Guitar 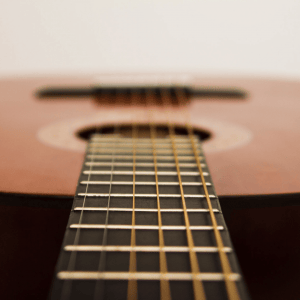 Acoustic guitars feature a lower number of frets as opposed to the electric guitar.

Some feature more than one sound hole while others do without any at all (a “folk” or “western-style” instrument).

There are usually 12 to 14 fret markings for playing notes along each string length between the nut which is located on either side of an opening in front.

How Many Frets are on a Classic Guitar?

The most common and typical style of classical guitar will have 12 frets on the neck.

This means that playing past fret 14 is unusual, but these guitars have an additional six to seven more frets along their body for up to 17 -19 total.

Number of Frets On A Bass Guitar 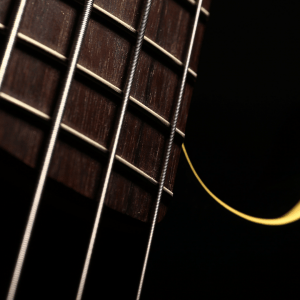 Many people have their own preferences in regards to what kind they should get; whether it’s based on looks, tone quality or how easy it will be for them personally due either physical limitations (hand size).

Number of Frets On A Cigar Box Guitar

Most cigar box guitars have around 18 frets but some of them do have 21 frets.

A few people often think that the more notes you can play, the better a guitar is – this is not always true.

Some of these instruments are difficult to use because your hand doesn’t entirely fit on it and there’s no cutaway for those higher or lower strings either!

The number of frets on electric and acoustic guitars is important for the sound you are trying to produce.

The more frets your guitar has, the easier it will be to reach those higher notes.

The frets on this board make it easier to play notes that repeat in patterns because they divide up the fingerboard into intervals.

If you’re a beginner, or if chord melody is your focus, then having less than 20 frets might work best because they make it easier to reach all the different strings without needing extra hand movements.

On the other hand, if you want to play lead lines such as those in country music then having more than 20 frets would be better because it allows for playing higher up on the neck with ease.

Guitarists who use their guitars for slide also prefer at least 22 frets.

Thank you for taking the time to read this article. We appreciate your time and remember to always HAVE FUN!