One thing you can do to start spice up your chord playing is learning minor chord progressions.

A lot of guitar players want to play more than just the same old chords.

But, what are some easy and fun things you can do?

Well, one thing is to practice playing different chord progressions.

I’m not sure how you feel about playing the same chords over and over, but this post is for those of you who are looking to change up your sound.

There are so many different minor chord progressions that can offer a unique twist on your regular old major progression.

You might be thinking “I only know a few chords!” but don’t worry, there are plenty of ways to play each one with subtle differences in tone and rhythm.

Difference Between Major and Minor Chords?

A chord is typically made up of 3 or more notes that are played at the same time. There’s one difference between major chords and minor chords: it comes down to note #3, also known as the “third.”

A major chord is distinguished from a minor one because of the third note.

Major and minor chords have different types of thirds.

What Are Major Chords?

A major chord has a natural third, which is the third note in its respective major scale.

Let’s use the key of C as an example.

The third of the chord is mostly what makes it major. So if you have C/E/G, then the third (C to E) is major, so the chord is called C major.

What Are Minor Chords?

Minor chords either have a flat or minor version of their 3rd degree – this makes sense because both “flat” and “minor” mean lower than usual!

A minor chord has either a minor or flat 3rd.

Let’s use the key of C again as an example.

If you have C/Eb/G, then the third is minor. This means that the chord is C minor.

Diminished chords are constructed by having both a minor 3rd from the root and diminished 5th.

The number of half steps between these two intervals is important to note.

It’s three half-steps for both values—from root to third being 3 is equal in distance with that between the third and fifth notes.

So basically we have a root note, flat third and flat fifth.

Diminished chords are often used in the musical scores and sound spooky because they sound ominous.

By using these 3 types of chords—major, minor and diminished—we can create different kinds from every degree on our major scale.

No. They are not minor chords and if they sound like a minor chord it is because the listener may be unaware of what diminished sounds like in nature.

Diminished chords cannot be major either so they are just what they are called.

The interval is made smaller, or one note of the scale has been dropped by a semitone.

This can be indicated using music notation as “♭” meaning that it is lowered in pitch by a half step (” diminished”).

What is a minor chord progression?

A chord progression is a sequence of at least 2 chords that are played one after another.

Usually, these sequences will be repeated as verses, choruses or bridges throughout the song to create an emotional journey which ultimately leads up to its beginning and end.

A minor chord progression is one that belongs to a minor key and uses the chords from its corresponding major.

This could mean some major chords are also used, as we have both relative minors and majors in our scale degrees — they share the same set of notes but occur in different places within it.

Why use minor chord progressions?

For the Western music context, a minor chord sounds darker than its major counterpart but is still considered highly consonant and stable.

Some of these chords may also be called minor as they include an additional note such as in seventh chords which are often used to create emotional effects.

What chords make up a minor key?

So which chords actually make up the minor key/progression?

Let’s look at A minor as our example.

The chords associated with the A minor scale are:

These notes give each key a distinct sound that you can use to play new songs or improvise on existing melodies.

If you take out the “A”, then this sequence will always be Minor, Diminished, Major, Minor, Minor, Major, Major.

What do the Roman Numerals Represent in a Chord Progression?

Roman numerals are used to indicate the order of chords in a chord progression.

Here is an example in C major:

First, the scale degrees are:

C = 1st degree of the scale

The 6th and final note (octave) to complete one full octave would be A .

What is the saddest chord progression?

That’s going to be up to how one feels when playing a certain chord progression.

One can be playing a minor chord progression and in conjunction with hopeful lyrics, the song may not feel as sad.

On the other hand, one can play a major chord progression with sonically sounds happier, but it threaded with more melancholy lyrics.

However, let’s take a look at some dark chord progressions.

The most popular chord progressions are I, IV, and V.

These chords, however, have little to do with the tone of a song, rather they just represent the key in which it’s being written.

Most “dark” songs are written in minor keys.

The chord progression is similar to a light pop song, Simon and Garfunkel’s’ “Sound of Silence” being an example. Some may consider it a “dark song.”

Its key is E flat Minor or D# minor which has the very common chord progression used in most popular music today!

Below you will find a minor chord progression chart that we put together for you.

On the left hand side you will see all 12 keys.

To the right, you will find the chords that you can play associated with the progression. 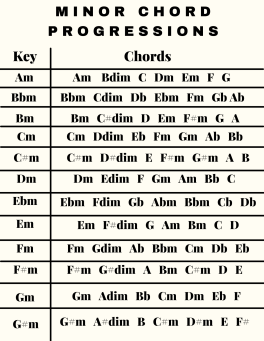 With this chord chart, you will not be able to put together your own minor chord progressions.

Here are some of my favorites that you can pick up and start playing today!

A minor has always been a “go to” for me. It just feels comfortable and I love the sound. In this progression and using the roman numerals, we are playing the i – v – iv – III of the progression.

With the three minor chords in a row and a major chord to finish off the sequence, you’ll have a fun time playing around with this.

B minor could be my most used chord when I’m writing a song. It just spells sadness.

In this progression, we are starting with that melancholy minor chord, but adding some brightness with the D major.

We then go back to the minor with F# and then give it some hope with a G major.

This one is fun to play as the transition from the F#m to the major E just gives you the control you need to make it stand out.

Add some light palm muting and when you get to the C#m and the A, you can let them ring out loudly to give it some extra spice.

Perhaps the trickiest to play out of the four. That’s largely because the Eb and F’s are being played like one would play a B major chord.

For beginners that shape can be a pain to learn but you can eventually learn other ways (see the video below) to play the chords while still enabling the strings to give a nice melody.

If you’re looking to get into the minor chord progressions but don’t know where to start, this blog post is for you!

With just three to four in each progression, it should be an easy task to learn the basic idea of how they work and then apply them creatively on your guitar.

We hope you enjoyed this post and found it helpful.

If there is anything we can do to make your experience more enjoyable, please let us know! What are some of the minor chord progressions that you enjoy playing?

Let us know which ones work for you and what songs inspired them below.

Thank you for taking the time to read this and remember to always HAVE FUN!