Power Chords are the simplest way to play songs on guitar.

They are a great way to build confidence. They’re easy and help expand your musical knowledge.

In this post we’ll cover playing power chords, how to find the right finger placement and some simple strumming patterns to use when playing them.

I know that playing guitar can be tough for beginners.

From all of the chord shapes, to strumming patterns, there are a lot of pieces that need to come together in order to sound like you know what you’re doing.

Let’s take a look at some more information about these two/three note chords, and if this is something you should the time to learn!

What are Power Chords?

Power chords consist of two notes: the root note and the fifth.

Power chords are an important part of guitar playing.

They’re a way to create a certain mood and tone in music, which is why they’re so popular.

There’s one thing you should know about these chords and that is that they are not difficult to play!

What are power chords used for?

They are often accompanied by palm muting which helps give them their characteristic crunchy tone that has been popularized in many rock genres like punk and grunge.

Are these types of chords bad?

They are an essential piece of any guitarist’s repertoire.

You can use this chord in any song if you really wanted to.

However, there are some people who claim they’re too simple and don’t require much skill to play.

Though it is true that the power chord has very few notes, it does take some know-how to use them effectively in different songs with different styles.

These chords are a great way to play notes anywhere on your guitar.

Not only can they be moved up and down the fretboard, but power chord shapes also stay in one position so you don’t need different fingers for each string like with other types of chords!

Let’s take a look at the three ways to play a power chord.

The first power chord shape you’re going to make starts on the 3rd fret of your low E string.

Start by placing your index finger there, then place your ring finger on the 5th fret on the A string.

You can also use your pinky on the A string as well.

In fact, I started off using my ring finger and then eventually adjusted to using the pinky as it felt more comfortable.

You can see both below! 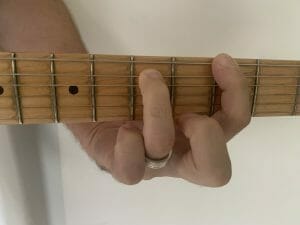 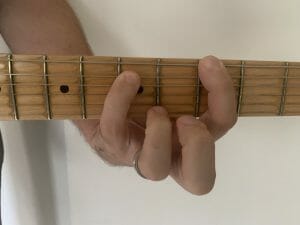 The next chord shape is going to be a little more complex than the first one.

Place your index on the E string third fret and play that along with your ring finger placed at the fifth fret on A string.

Now here is where this shape is different. We will take our pinky and tuck it under the ring finger on the fifth fret.

The tone of your guitar will change with these chords, as it sounds a little louder and beefier due to you being able to duplicate the root note. 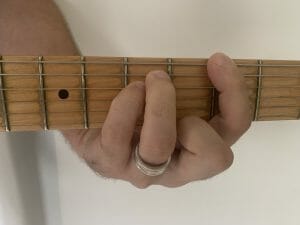 The final chord shape we’re going to use a barre for.

The barre can be a challenge, so it’s important that everyone gives themselves time and tries out both of the first two shapes before trying this shape.

If you find yourself getting frustrated with how uncomfortable your ring finger is feeling while holding down all those strings at once, then consider playing each individual note in slower-tempo until you have clarity. 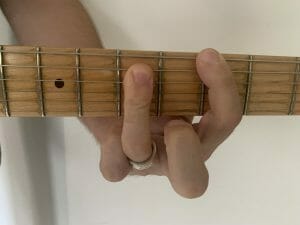 Is a power chord really a chord?

Yes it is really a chord!

Power chords are just a two-note chord, with no major or minor quality.

Power Chords just have the root and fifth of any given song as its only components to give it that signature sound you know so well from rock songs like Black Sabbath’s “Heaven And Hell.”

Are power chords and barre chords the same?

Power chords and barre chords are not the same.

Power chords are less versatile than barre chords which can be played anywhere on any fretboard without having to change fingers too much.

Barre chords are often used in rock music because of their ability to bend notes, but power chords work well for blues or punk music too!

Learning how to play these chords can be a daunting task for beginners, but hopefully this guide will show you the basics of playing these powerful sounds.

Power chords are a staple in the rock and metal genres.

We hope that our blog post has been helpful for those of you who are just starting out or looking for guidance on power chords.

Let us know your thoughts on your experience with power chords below.

Thank you for taking the time to read this article. Remember to always HAVE FUN!